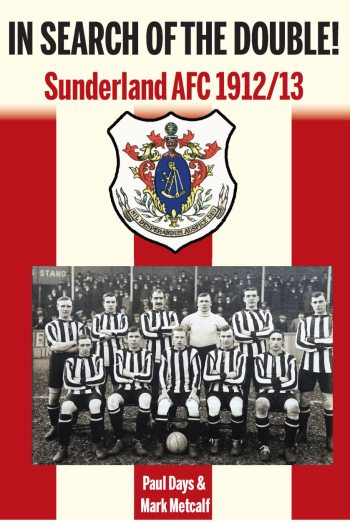 For most supporters of Sunderland AFC, the history of their club would probably be best represented by the names of the mid 1930s team, particularly Gurney and Carter, undoubted Wearside football legends. The name of Charlie Buchan also looms large even today in the tale of a football club whose history can be cut like a knife. Although Charlie Buchan might still be a revered figure on Wearside, his team mates aren’t and yet the 1912/13 season, which is the subject of this book, produced arguably the fi nest Sunderland team ever to grace the famous red and white striped shirts.

It came the closest the club has ever come to winning the double, almost became the first English football club to achieve it in the 20th century, yet the names of Albert Milton, Frank Cuggy, Jackie Mordue and the rest of Sunderland’s league champions and FA Cup finalists that season have long since been cast into the annals of the club’s history. Even the football club’s near talismanic and perhaps finest ever captain Charlie Thomson is seemingly forgotten. The was team guided by Bob Kyle, Sunderland AFC’s longest serving manager, he too also forgotten. This book looks at the matches and the characters that shaped an immensely successful 1912/13 season.

Although they were crowned league champions, perhaps an enduring highlight, although it ultimately ended in defeat, was the now legendary FA Cup final which took place at The Crystal Palace in April 1913, before a world record crowd. For the first time in the 20th Century England’s top two football teams contested for the most coveted domestic knockout cup competition in world football and what a tale it tells; an iconic match. Finally, to give the book a social context and a flavour of the times, we have captured the main news stories of the 1912/13 period which includes some momentous incidents such as the sinking of the Titanic; another iconic event.

Pay for your goods through Paypal.

1) Secure payments for customers are guaranteed through Paypal. Email Mark with your order and Mark will then send you a Paypal request.
2) Paypal payments are easy to organise and there is no cost to the customer. You can pay with your credit card through Paypal. Also, the customer doesn’t need to have a Paypal account and no bank details are disclosed.
3) Make sure to put your address in the email so that goods can be sent to the right place in the UK. FREE postage and packing to the UK. Postage to Europe and the rest of the world is extra (email Mark for price).
4) Returns – Your Satisfaction Guaranteed : We’re sure you’ll love Markwrite products. If you don’t, simply return for a full refund (excluding postage).