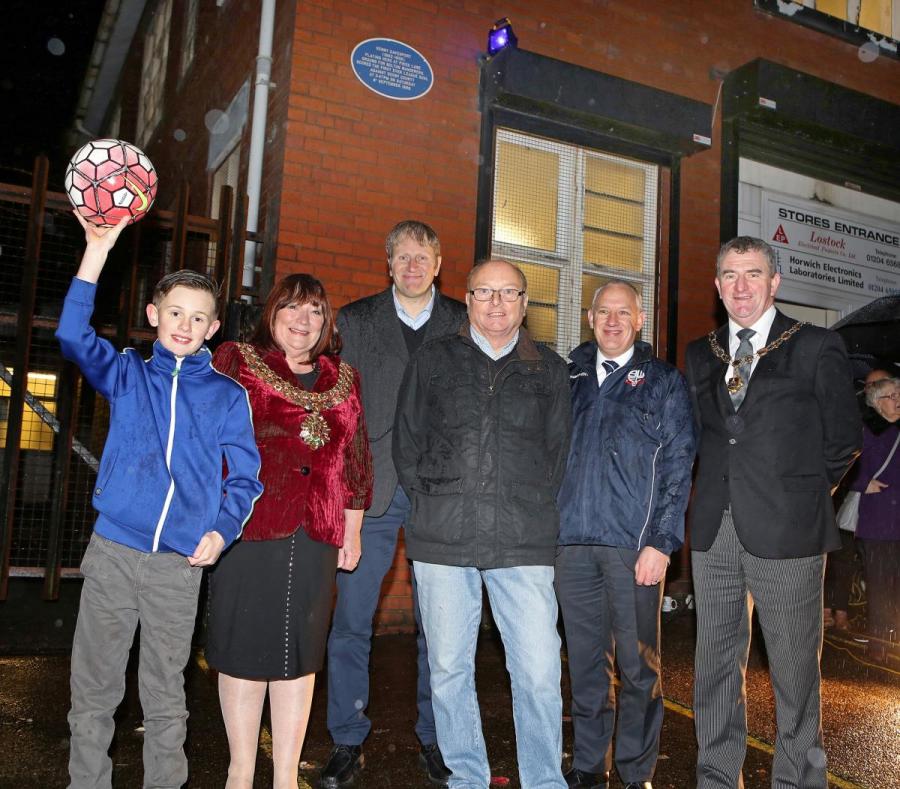 ON a cold and rainy Tuesday night in a quiet Bolton back street, a crowd gathered to commemorate a piece of sporting history.

A small blue plaque has been fitted on to the front of a building in Bankfield Street, off Deane Road, to commemorate where Bolton Wanderers’ Kenny Davenport scored against Derby County at 3.47pm on Saturday September 8, 1888 — the first goal ever scored in league football anywhere in the world.

Research from Sunderland supporter and football historian Mark Metcalf uncovered the feat and Bolton Wanderers arranged for the plaque to be made.

Relatives of Mr Davenport were contacted and invited to the unveiling, at which representatives of the football club, Mr Metcalf and Professional Footballers Association chief Gordon Taylor were also present.

Mr Metcalf said: “I’m very pleased that the plaque is here to mark what, for me, is definitely the most important goal in football.

“Although I’m a Sunderland fan myself, I know Bolton is a fantastic town and its football club is hugely important to the narrative of football in this country.

“There are many plaques up and down the country marking major events or important people in other walks of life – quite rightly – but I feel football has such an important part to play in the social and economic history of Britain that moments like this should be remembered too.”

BWFC secretary Simon Marland said it was “magnificent” that Mr Metcalf had managed to find out that the club was the first ever to score in league football.

“Something like this can never, ever, be taken away from us,” he added.

Phil Mason, BWFC chaplain, who helped arrange for the plaque to be made and for family members of Mr Davenport to visit, said it was a “wonderful” event.

He added: “It’s brilliant to be part of this project which has brought many people together.

“There is nothing more important than where the first ever league goal was scored, is there?” And Brian Aspden, the great grandson of Kenny Davenport, said the whole experience was “quite surreal”.

“I can’t believe all this is happening, there are TV cameras here, people from the club, it’s brilliant,” added the 68-year-old.

Mr Aspden is originally from Bolton and was a season ticket holder at Burnden Park but now lives in Doncaster. He said he was very proud to be a relative of Mr Davenport.

Duncan Simm, joint owner of Lostock Electrical Projects, who agreed to have the sign put on the company’s building, joked that it was all good publicity for his business, but added: “It’s a nice thing to do for Wanderers and fans and people who are interested in football in general.”

Many thanks to the Bolton News for allowing this article to be reproduced.

Find out more about Kenny Davenport in this book.