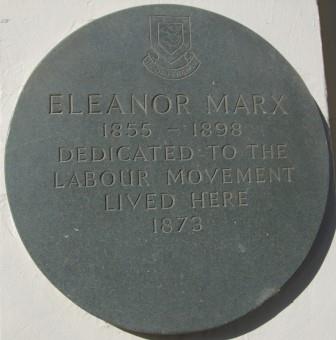 There is a grey plaque mounted on 6 Vernon Terrace, Brighton to Eleanor Marx, women’s rights campaigner and daughter to Karl Marx. Known as ‘Tussy’ she was interested in politics from a very early age. At sixteen she became her father’s secretary, accompanying him to socialist conferences. A disagreement however with her father over a love affair with the considerably older Prosper-Olivier Lissagray, a French journalist who had participated in the 1871 Paris Commune, saw her move to Brighton to work as a schoolteacher. She resided at 6 Vernon Terrace in the Montpelier suburb. She then assisted Lissagray to write the History of the Commune 1871.

In 1884 she joined the Social Democratic Federation, before quickly leaving to join the Socialist League, writing regularly for the paper of an organisation whose most known member was William Morris. In 1885, she helped organise in Paris the International Socialist Congress and over the following years she supported many strikes including the 1888 Bryant and May strike by women there and the London Dock Strike of the following year. Eleanor later took up acting and also translated various literary works. After discovering that her long-term partner, Edward Aveling, had secretly married, Eleanor Marx sadly committed suicide in March 1898.

There are a number of books written on Eleanor Marx.

Many thanks to Celia Stubbs, a retired Unison member, for the photograph which appears here. Celia, the partner of Blair Peach, murdered by the police at Southall in April 1979, is a remarkable woman whose tireless campaigning on, amongst many other things, miscarriage of justice cases and asylum seekers and refugees has been an inspiration to many other people.