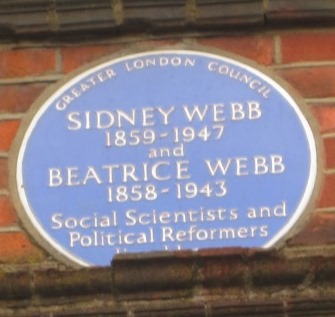 Erected in 1981 by the Greater London Council, there is a blue plaque to Beatrice and Sidney Webb at 10 Netherall Gardens, Swiss Cottage, Camden, London.

Beatrice Potter was the granddaughter of Richard Potter, the Radical MP for Wigan. In 1886 she went to work for Charles Booth, who was studying the lives of working people in London. She studied the lives of the dock workers in the East End and supported the London Dock Strike in 1889.

Sidney Webb’s father also held radical political views and in 1885 he joined the Fabian Society, which described itself as a ‘fact-finding and fact-dispensing body’ and it produced pamphlets, many written by Webb, on a wide range of different social issues.

Sidney and Beatrice Potter married in 1892 and later worked on several books together including the History of Trade Unionism (1894) and Industrial Democracy (1897). The research they carried out for these books convinced them of the need to establish a political party that was committed to obtaining socialism through parliamentary elections.  On 27 February 1900, the Fabian Society joined with the Independent Labour Party, the Social Democratic Federation and trade unionists to form the Labour Representation Committee, which stood 15 candidates in that years General Election and won two seats with Keir Hardie and Richard Bell both elected. The LRC was to change its name to the Labour Party on 12 February 1906.

The Webbs were though willing to work with any party in order to obtain policies they believed in and in 1902 the pair helped draft the Conservative’s Education Act.

Beatrice Webb served on the 1905-09 Poor Law Commission and when she found herself in disagreement with most of the Commission members she and Sidney wrote and published a minority report.

In 1913, the Webbs helped start a new political weekly, the New Statesman. In 1923, Sidney Webb was elected as Labour MP for Seaham, County Durham. He subsequently served as President of the Board of Trade under Ramsay MacDonald, Britain’s first Labour Prime Minister. Sidney later served as Secretary of State for the Colonies in MacDonald’s second Labour Government.

The ashes of Sidney and Beatrice Webb lie in the north aisle of the nave of Westminster Abbey. The small lozenge stone bears their names and the years they were born and died.