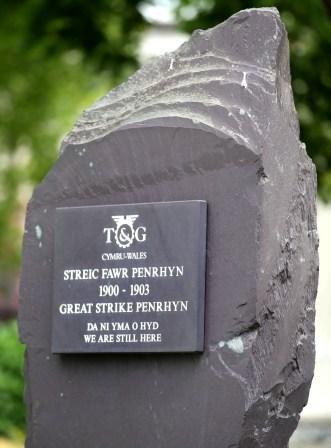 The strike at Penrhyn Quarry, Bethesda in North Wales, which began on 22 November 1900 lasted for three years and is the longest dispute in British industrial history.

Quarrymen were forced to endure extremely hard and dangerous work for very low levels of pay.  They were also badly treated by their employers, who often regarded them as their own property and allowed them only Christmas Day off as a holiday.

Following disputes in 1825, 1864 and 1865, the North Wales Quarrymen’s Union was established in 1874 and achieved success that year in disputes at Penrhyn and the nearby Dinorwic Quarry. Circumstances were just that little bit better for the men but in 1896 the Penrhyn quarry workers were defeated in their battle for a minimum wage after staying out on strike for eleven months.

Aristocratic families owned all of the quarries in North Wales with Penrhyn in the hands of Lord Penrhyn. His family had at one time owned thousands of slaves on their Jamaican sugar plantations. They won huge compensation for ‘loss of income’ when slavery was abolished. They invested this in developing their slate quarries and improving Penrhyn Castle.

In 1900, its owners informed 2,800 Penrhyn quarry workers that trade union contributions were to be ended at the site. Conflict with supervising contractors led to 26 men being taken to court. After taking solidarity strike action the quarrymen returned to work only to discover that 800 of them no longer had any work after eight banks had been closed. Every worker left the quarry and despite the hardships an improved company offer was refused at Christmas 1900.

Trade union donations and a special fund organised by the Daily News helped alleviate some of the suffering but many children went crying to bed unfed, with women sobbing that they could not fill their mouths.  On 11 June 1901 the quarry was re-opened with the company inviting selected quarrymen to break the strike by offering them increased wages. Only 242 returned to work, where they were joined by a similar number of newly recruited inexperienced employees. One of those driven back to work by his desire to prevent his family starving was so heartbroken he subsequently hung himself.

Those who returned were considered traitors. Cards with the wording ‘Nid Oes Bradwr yn y Ty Hwn’ (There is no traitor in this house) were displayed in the strikers’ windows. Taking down a card was a sign that a worker had returned to work. Lord Penrhyn then built new homes for strikebreakers away from the centre of Bethesda. The strikers complained of ceaseless persecution and beatings by the police and a committee of inquiry appointed by Caernarvonshire County Council found that the police acted without regard to the liberties of those on strike. Attacks on strikers by those who had gone back to work were also left unpunished.

After three years on strike the desperate suffering of the strikers forced them to return to work on Lord Penrhyn’s terms. The victorious owner refused to re-employ the strike leaders and many subsequently left the area permanently to find work elsewhere.  The memorial to the strike was unveiled in Bethesda on 11 November 2000. This was organised by the Transport and General Workers Union (TGWU), who inherited the mantle of the Quarrymen’s Union when the organisations merged in the 1950s.  The TGWU is now part of Unite, which represents the current workers at Penrhyn quarry, which is today owned by the Welsh Slate Company.

To find out more on the dispute then buy WHAT I SAW AT BETHESDA – Charles Sheridan Jones, who was the special correspondent, sent by the Daily News to cover the unfolding drama and his articles were collected into this book, which was originally published in 1903. His are first-hand experiences of the misery and injustice suffered by the workers families, and of the cruelty of Lord Penrhyn’s methods.  £7.99 plus postage:-  http://www.gomer.co.uk/index.php/books-for-adults/history-and-culture/what-i-saw-at-bethesda.html