In the second decade of the nineteenth century, a lack of suffrage (more than half of all MPs were elected by just 154 votes) and the poor economic conditions that followed the end of the Napoleonic Wars in 1815 combined to create a mass movement that demanded reform of parliamentary representation.

On 16 August 1819 at St Peter’s Field, Manchester a cavalry charge resulted in the deaths of 15 demonstrators from amongst a crowd estimated at between sixty and eighty thousand. The massacre was to become known as Peterloo, an ironic reference to the Battle of Waterloo four years earlier. 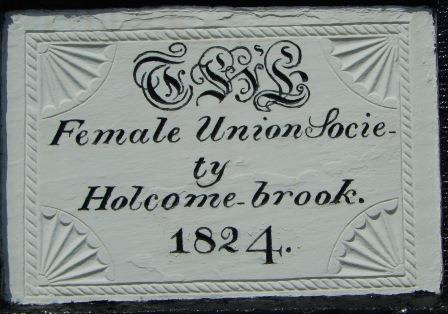 Amongst the crowd were many women. Nevertheless, radical policy at this period was generally to press for universal male suffrage. Some female campaigners were not content and organised Female Union Societies to demand a vote for all, male and female. Many societies were established in the North-West of England industrialised cotton towns, including at Holcombe Brook, Ramsbottom, just north of Bury.

An inscribed stone at a cottage in Holcombe Brook is the only surviving evidence of this particular women’s organisation.