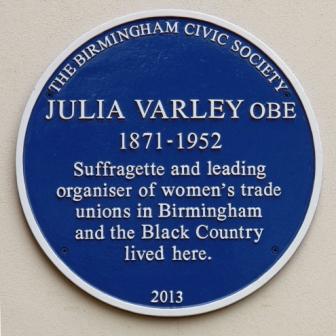 Judged by any criteria, Julia Varley was an extraordinary woman who devoted her entire working life  to fighting for better working conditions for women and men employed in a range of trades and industries. She was also an ardent campaigner for women’s right to vote and was twice sent to Holloway Prison for her activities on this.

Born in Bradford in 1871 she followed her father by becoming a woollen mill worker at aged 12. Three years later she became secretary of the Bradford branch of the Weavers and Textile Workers Union and soon after also joined the Women’s Trade Union League and National Federation of Women Workers (NFWW) as she fought to organise ‘sweated labour’ where men and women worked long hours, were poorly paid and endured terrible working and welfare conditions. Julia moved to Birmingham after Edward Cadbury invited her to establish a NFWW branch at Cadbury’s Bournville Factory. The new branch Julia Varley set up became affiliated in 1909 to Birmingham Trades Council (TC) and soon after she  became the first women to be elected to its executive committee.

Within the TC she was very involved in a series of major campaigns, including a fight to limit the hours of bakery workers and to introduce a minimum wage. In 1910  she was one of the leading organisers of the historic Cradley Heath women chainmakers’ ten-week strike that attracted international attention and resulted in a famous victory for the NFWW, resulting in the payment of a minimum wage.

Although she retained a focus on working women, Julia Varley became a Midlands organiser for the Workers’ Union in 1912. This had been formed on May Day 1898 with Tom Mann, who achieved fame in 1889 as one of the leaders of the London Dock Strike,  prominent in its initial development. The paper for the union – The Record – was clear why she had been appointed: ‘we wish that more working women had the experience of Julia Varley of mill work.’

The WU organised both men and women. In 1913 Varley was a key part of the strike by Cornish China Clay workers that helped lay the ground for trade union development in that region of the country. (see Unite book of the month on this at https://markwritecouk.files.wordpress.com/2018/07/6328-julia-varley-booklet.pdf

Julia was also heavily involved in many disputes in Birmingham and the Black Country right up until the First World War, during which she particularly worked to organise the increasing numbers of women finding themselves in paid work. 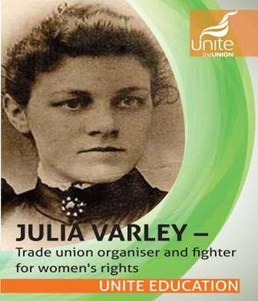 Julia occupied her post with the WU until it amalgamated with the Transport and General Workers’ Union (TGWU) in 1929 at which time she became the TGWU’s Women’s Officer. She also served on the General Council of the Trade Union Congress throughout the 1920s and chaired its Women’s Group. In 1931, Julia Varley was awarded an OBE for her services to public work. She retired in 1936 and died in Bradford in 1952 at the age of 81.

A plaque in Julia’s honour was unveiled by the Birmingham Civic Society on 24 May 2013 http://www.birminghammail.co.uk/news/local-news/birmingham-suffragette-julia-varley-honoured-3862243

Unite would like to thank Birmingham Civic Society and in particular the photographer Jamie Justham for allowing us to reproduce Jamie’s photo of the plaque . You can find out more about the society at: – http://www.birminghamcivicsociety.org.uk

One thought on “Julia Varley, Birmingham”