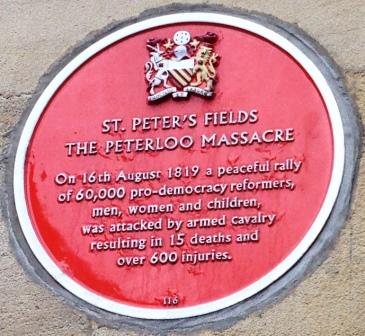 There is a small red plaque to the 1819 Peterloo massacre on the wall (it’s on the corner of Peter Street and Southmill Street) of the Radisson Hotel (the Free Trade Hall as was), Manchester.

In 1819 only 2% of people could vote and there was widespread poverty, due mainly to the corns laws that artificially inflated bread prices. On 16 August 1819, contingents from across the Manchester region marched in disciplined fashion to St Peter’s Field to support parliamentary reform by listening to radical speaker Henry Hunt. The crowd was at least 60,000, half the population of the immediate Manchester area.

Banners demanded REFORM, UNIVERSAL SUFFRAGE AND EQUAL REPRESENTATION. Those in a government representing their own needs wanted no such things and sought to arrest Hunt and disperse the crowd.

Wielding sabres, Manchester and Salford Yeomanry galloped into the unarmed, peaceful masses. Two-year-old William Fildes was the first casualty when a late arriving trooper knocked him from his mother’s arms. Fifteen people, at least, were killed and 600 to 800 injured.

Amongst the dead was ex-soldier John Lees, who fought at the Battle of Waterloo. Peterloo became a mocking reference to Waterloo at which soldiers were viewed as genuine heroes. In recent times Peterloo has become compared with the slaughter of pro-democracy demonstrators in Tiananmen Square in 1989.

Not content with their killings the authorities in 1819 cracked down on reform. However, liberty could not be suppressed and demands for economic and political justice multiplied. The great Reform Act of 1832 meant Manchester, previously unrepresented in Parliament, elected two MPs. Sweeping democratic changes followed later.

Manchester City Council is committed to a new memorial, which will be part of the redevelopments of the St Peter’s Square area. Turner prize winner Jeremy Deller has been commissioned to design the memorial.

For more information on Peterloo, including details of the annual commemoration events, go to:- http://www.peterloomassacre.org/index.html