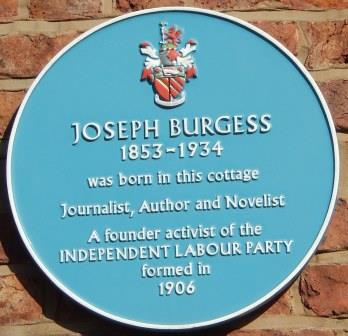 A blue plaque at the birthplace of journalist and Labour politician Joseph Burgess was unveiled at 64a, Old Road, Failsworth in October 2007. Failsworth Historical Society had campaigned for the erection of the plaque with Kevin McPhillips dissertation key to the resurrection of interest in Burgess’s life and work.

Burgess, a Christian Socialist, spent his life, talents and energy in the cause of the working class. He was just six when he began work in a card-cutting room and worked as a cotton operative until he was 28 when he began work as a correspondent for a local newspaper.

His talents as a journalist could have earned him an easier life but he refused to compromise to satisfy the major print employers. Burgess established and worked for a number of socialist papers including the Yorkshire Factory Times and Bradford Pioneer.

Burgess was active in the creation of the Independent Labour Party (ILP), a socialist party established in Bradford in 1893 and which was affiliated to the Labour Party from 1906 to 1932. Burgess was unsuccessful on a number of occasions when he stood as an ILP Parliamentary candidate but he was elected as a member of Glasgow City Council and served between 1902 and 1905.

Many thanks to Alan Bedford, a Unite safety rep from Oldham, for ensuring Joseph Burgess is on Rebel Road.

“I want to help ensure that the labour movement heroes of the past are not forgotten as hopefully they can act as an encouragement to activists today.” said Alan.
.